We live surrounded by assumptions. As it becomes standard to choose between working remotely and working from an office, women will choose to work from home. This is because women usually prefer to increase their work-life balance, unlike men, who unnecessarily overload themselves with work.

But shouldn’t we all make the choices to improve our work-life balance? Why would you leave it only for women?

Watch the video to find out more about these false assumptions!

Could remote work make women less visible in the workplace? Welcome, ladies and gentlemen. This is Virtual Coffee Chat with Luis. This is my double espresso, and let’s take a sip before diving into some controversy. All right. So the flavor of the day is people saying, “Oh no, remote work is going to make things bad.” You know, so here is the idea. And the idea is that as it becomes standard to have a choice between working remotely and working from home, women are going to more predominantly choose working from home, because women are generally smarter than men and they know better about work-life balance.

And then, you know, the stupid man who want to work until they fall dead, to have a marginal increase, a 2 to 5% increase in their salary will keep going to the office. And they’ll get all the promotions because they’re in the office and it just looks like they care more. There’s so much wrong with this that I don’t even know where to begin. Now, first off I don’t go to the office. So do I care less? Maybe, maybe. Is a 5% better salary, even 10% better salary worth me living, quite honestly, a terrible life that will end up decreasing the useful time in my life, and making me feel miserable? You know, retiring and thinking that, “Oh well, that was a waste of time.” I don’t really think so. I don’t really think so.

So, first of all, this whole assumption… The thing used to be equal pay for equal work, right? That used to be the situation. And I’m absolutely in agreement with that, right? Now, if some people want to kill themselves and live terrible lives when they could be leading really balanced, really luxurious rich lives, in exchange for a pitiful salary and increase, I guess so much the power for them. I don’t see how this reflects on gender, apart from the fact that women generally, I have to admit, make healthier life choices. And that’s a life choice. That’s a life choice that I support and that actually most remote workers, female, or not support.

A lot of people seem to think that when push comes to shove, they’d rather be paid less and stay remote. I respect that. I agree with that. I don’t think that should be necessary. So let’s talk about that. Maybe it makes more sense to talk about that. Okay. So, the tease is this. If some people are not in the office and other peoples are in the office, the ones at the office are perceived as caring more for some reason, right? Because as if being in the office makes their work better or make them work more. The productivity, I mean, the productivity samplings seem to suggest that no, that that’s not the case, that people in the office are actually slightly less productive. But whatever, you know?

Look, if I see Bob every day at work, and if I only see Sue like three times a week, yeah, I can see that I’d be biased to when I need someone to lead a project. And Bob, just by the event of seeing Bob every day would probably come to mind first, right? Now, if I manage people based on impulse, that’s a pretty bad way to manage, right? At the end of the day what we need are systems, right? Systems that let me choose the best person for the job. And the amount of time they spend in the office shouldn’t be part of those systems, right? I should measure based on productivity, based on previous performance, based on their specialties, based on their strengths and weaknesses, et cetera, et cetera, et cetera. I mean, that’s the way to go.

So the only way we’re going to get rid of this completely is eventually when we get rid of the office completely. I have to say that, I mean, I work for Think Remote. Think remote is a majority female business. In fact, there are two men working at Think Remote, and eight women. So it’s very small. Look, it’s a very small business, we’re growing, but you know starting with the small team and all. And it just got that because when hiring, I just didn’t thought that the female candidates were, you know, the better fit. Now, obviously we don’t have an office, so there’s no chance for anyone to go to the office, we are a fully remote company.

But hybrid companies have a nice rule, the best hybrid companies, which is the one remote, all remote. Which is that, even if people want to go to the office, interactions on delivering stuff, or even communicating. I mean, on these companies, even if there’s like 10 people in the office and 10 people out of the office, the 10 people in the office still take a call on their computers on Zoom, via separate computers and on separate rooms. They don’t get all together on a room and then connect to everyone else. So that’s a good way to go about it.

There really is no… I think that what people are trying to do this week when they push out this news in concert, as you know, media likes to do too, to bundle clicks together, is that they’re trying to make a remote work problem which it is, into a gender problem. And I think that we already have enough of these and we should be working to minimize it, not try to find out more. The reality is that there is a gap, yes, between the people in working remotely, and the people in the office.

There are ways to minimize that gap, and I actually think that we’re working on it. But when push comes to shove, if anyone be it either male or female, decides that it’s worth… even if it’s unfair, based on the work they do, if they decide that it’s worth earning a little less over the course of their career, but leading a rich life, a really flexible free life. And you know what? I think that’s the right choice. That’s the choice I choose. I mean, I used to be a dental surgeon.

I definitely took a hit on my salary for living the life that I live and I don’t regret a bit of it. So, if you make that choice, it’s a tough one, but it’s totally worth it. And we’re going to be here working to minimize the impact. I do believe that’s been in something like a decade or so, the people working… There will be no difference between people working remotely, people working the office, maybe even less, maybe even in five years, who knows here’s to that.

Thank you, ladies and gentlemen for this episode of Virtual Coffee Chat with Luis. I hope I wasn’t too controversial, right? Ladies working remotely, all the power to you. And if you actually are in the writing business or editing business, please send me your CVs. You’re not going to be discriminated here. Think Remote is always looking for new awesome writers and editors, and even graphic artists. So, send them over, head to www.thinkremote.com, and see all the latest about how to be great at remote work. Bye-bye. 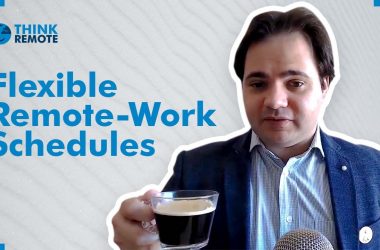 Remote work schedules are flexible. But are they too flexible? Do people misunderstand the context of the word… 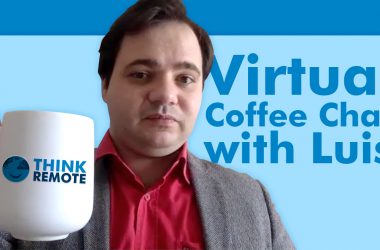 (VIDEO) Director of Remote Work – The Hottest Job Title of 2021?

You’ve probably heard of this new job title called “Director of Remote Work” already. Is it really worth… 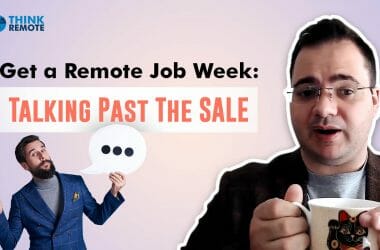 (VIDEO) GET A Remote JOB Week: Talking Past The Sale

You are watching Get A Remote JOB Week, where Luis talks about everything you’ll need to take into…

Abril Lombardi
Read More
By browsing this website, you accept that cookies are happening, you can see how we use them here. They are sugar-free and protein-rich, so don’t worry too much.
Cookie settingsACCEPT
Manage consent