Can REMOTE WORK Save the ECONOMY?

Is your economy needing some stabilization? Do you think remote work can save it? Luis has the answers!

So last week, several articles about the state of Georgia came out and called attention. The thing is, a new $2 trillion infrastructure package from the current U.S. administration emerged, offering the opportunity to bring high-speed broadband to unserved areas of Georgia. Well, that’s an idea!

Though the headline may be a bit misleading, the good news is that any other states struggling with the economy could benefit from this, drifting in a massive economic development opportunity through remote work.

Watch Luis’s video to find out more about this new idea!

Can remote work save the economy? Welcome ladies and gentlemen to Virtual Coffee Chat with Luis. I am your host, Louise, and I’m having myself a double espresso. Nice.

All right. So last week, a couple of articles came out specifically talking about the case of the State of Georgia, wondering if remote work can save the economy. At the center of this was the press for a new $2 trillion infrastructure package from the current US administration that offers the opportunity to bring high-speed broadband to unserved areas of Georgia. And talking about Georgia, but obviously any other states that are struggling with the economy could benefit from this. And that’s considered a massive economic development opportunity, especially given in light, remote work. Right? So can remote work save the economy? I’d say that that headline might be a bit misleading. I’m not an economist. All I have is just common sense, but it doesn’t seem to me very likely that any one thing will save any economy, right? Either in the US or Europe or anywhere, but the economy is a very complex beast and there are a multitude of factors going into it.

Now, what I do think that remote work can do is help with naturally redistributing resources to locations that have traditionally been left a bit forgotten. That’s to say, specialized work is usually contained in a few hub cities, right? Or hub states in case of bigger countries. I mean, for example, in the states, a lot of wealth is concentrated in New York, in San Francisco, et cetera. And my own country, Portugal, a lot of wealth is concentrated around Lisbon. We’re a small country. So there is not so many hubs, but you get the idea.

Now, that means the farther away you go from those ups of commerce and of trade, people have a bit lower quality of life. They can’t get so high paying jobs, their businesses have less traffic, et cetera, et cetera. Now, if you somewhat redistribute the population with these high paying jobs, as is the case, for example, of most of tech can be done remotely. So there’s no reason for it to be concentrated in a hub like Lisbon or San Francisco.

So, if you distribute that through remote work, that will mean that those people, consumers, that we are, will consume more on those areas farther away from the hub, and that will help local economy evolve a bit. That’s not the same thing as saying that remote work saves the economy because usually when you talk about the economy, you’re usually talking about a country or a group of countries, such as the EU. That’s what matters for the big picture economy. Now, local economy, sure. I’ve talked about that a couple of times. It is going on the medium term, on the medium term, it is going to help local businesses and more rural areas. That’s just by the factor of people with nice paying jobs, moving in to areas where they would traditionally not live in.

The lever for this right now is remote work, but it could be any other number of things. It just happened that remote work was the one. But let’s say if… I mean, in some countries, the government actually pays high-income people and job creating companies to actually move their businesses to rural areas so that those areas will further develop. This is not new to remote work, but remote work does make it somewhat easier. So can remote work save the economy? It can help. It can definitely help. It will improve local economies. That’s for sure. But the whole concept of remote work saving the economy, either in the United States or in Europe. Sorry, not enough, not enough. It’s definitely going to help, but more different and very impactful changes are going to need to happen. But talking about those is above my pay grade.

I do hope that you’ve enjoyed hearing me talking about remote work, which is what I know. And well, of course, if you want to know more about remote work, know how to become better at it and know what it’s all about, please head to thinkremote.com. You can subscribe there for our newsletter and there will be very nice content heading your way. And if you did enjoy this video, please press like, subscribe, and share. This was virtual coffee chat with Luis. And I almost didn’t drink coffee. Sorry. I got kind of focused on the topic, but I do hope that you are enjoying a nice cup of coffee wherever you are. See you tomorrow. Bye-bye. 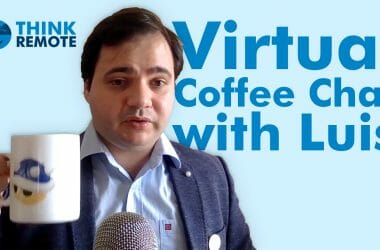 (VIDEO) Does Zoom Make You Stupid? Luis Has the Answer

It’s time for Virtual Coffee Chat with Luis! From whether Zoom makes you stupid or not to Costa… 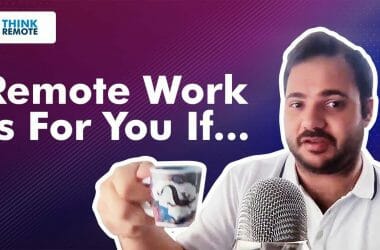 (VIDEO) Is REMOTE Work For YOU?

Should you choose a remote job? Would you be good working from home? How can you know? Let’s… 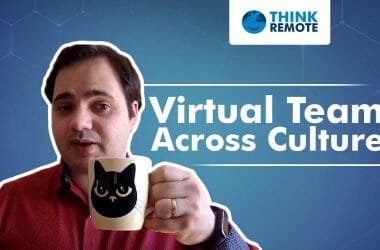