(VIDEO) What If You COULD SAVE One Year of INCOME TAXES While Working REMOTELY?

Would you like to work from an island in paradise while you save one year’s work of income taxes? Who would reject this, right? Luis shares the insights!

The good news is, if you’re an independent professional, such as a freelancer or a contract worker, there is a way you can reach this lifestyle, and completely legal!

Where? Watch the video to find out!

What if you could save one year’s worth of income tax while working from an island paradise? Well, if you’re an independent professional, such as a freelancer or a contract worker, there’s a way to do it, perfectly legal. Let’s talk about it in Virtual Coffee Chat with Luis.

So, I am Luis, and this is my coffee, in this case an espresso and my little espresso cup as Fernando Pessoa, one of the greatest, if not the greatest Portuguese poets. The reason this is a Portuguese team is because, well, Portugal is my homeland and it was Portuguese Day, last week, Portugal Day, last week. And I actually couldn’t mention that in my Virtual Coffee Chat because it was a holiday, I had to record it earlier. So anyway, but today’s news is actually very Portuguese team. So it’s a good time for me to record while drinking my traditional espresso shot. So, if you haven’t tried espresso, so I highly recommended it. I can’t go back to normal coffee. Well, that’s not true. Sometimes I go back to normal coffee, but that’s just so nice.

In any case. So, I want to talk to you about a Cabo Verde, which in Portuguese to English, it translates something like green Cape. And it’s one of the ex-Portuguese colonies off the coast of Africa. It’s now an independent island country and it is beautiful. It has everything you’d associate with an island paradise, blue, blue seas, green forests, blue skies as well. A very, very nice baseline temperature. It’s really cool. But what’s coolest even, is that they are trying to attract digital nomads to their shores. So, the current plan to which anyone in Europe, the US or Portuguese speaking countries, so basically most of the world can apply to, is a program that will give you a six month visa for you and your family for the very, very low price off of something like 50 bucks a person. So quite low for six months and extensible to a full year so that you can work from there, right?

It’s a work visa. You can work, you can apply. You get the visa, you can work from there. And while you’re working from there, if you’re a… Obviously, if you don’t have responsibilities in the other countries, if you’re basically a contractor worker or freelancer, you don’t have to pay any income tax. So basically you get to do the work that you’re doing from an island paradise, with no income tax whatsoever. You’re not obliged to pay income tax. There. Right now, obviously if you’re not a contract worker or a freelancer, if you’re not an independent worker, you might have commitments, right, to the company that you work with to the country of where the company you work for is based. I can talk about that, but for those kinds of professionals, it seems like a very sweet deal. That visa cots almost nothing.

I would urge you to search for this soon because there’s a limited supply. They are counting on doing like something like 4,000 off the things. So I would definitely urge you to try it out because it is a beautiful, beautiful country. And again, this is one of the things that I liked the most about remote work, is that it really allows everyone to win, right? Your clients won’t lose anything because it’s not like your income tax influences them. The country will benefit massively for having people with… I would say that probably who ever picks up on this has a higher level of income than the residents. So although they won’t be paying any income tax, they will definitely be contributing to the local economy’s growth because they will be spending there. And there’s a lot of neat stuff to spend on in Cabo Verde.

And definitely it’s good for you because just imagine, especially if you’re in America or in one of… For me, income tax, that’s something like 40% of what I make, right? Maybe I’ll apply, who knows. But it that’s definitely… For a year I can earn 40% more. That’s quite something, right? And I guess that many people will be in the same situation. So this is definitely a great opportunity. I urge you to check it out. And this is yet another way in which remote work really helps make the economy work for you essentially. It makes the economy work for you. And it really is not a zero sum game. This benefits everyone involved.

It was very wise of the Cape Verde government to understand that, okay, we’re not going to win… We can let go of the income tax of these people because, well, number one they wouldn’t be working here anyway. So it’s not like we’re losing anything. And number two, they will definitely bring their expenses. They will consume. And then the Cabo Verde government can just pick up on the income tax from the extra income of the locals. So it’s definitely great. It’s good for everyone. It’s good for the workers that save on income tax. And it’s great for the locals that win more. And it’s good for the government, because eventually some of that goes into their pocket.

I wish more people would do this. I wish more countries would do this. More cities would do this. If you’re listening to this and you have decision-making power, in some of these smaller more independent countries, consider it, right? See if your country, as the infrastructure, as Cabo Verde does, Cabo Verde has high speed, reliable internet. And if the place where you’re responsible for things as that kind of infrastructure, by all means, do it. Try to make it attractive, create attractive packages for digital nomads, for contractors. It’s a very nice way to stimulate the local economy.

So, anyway, that’s the Virtual Coffee Chat for today. I hope you enjoyed it. It was a bit more lighthearted than usual because it can’t be business all the time, right? We’re here in this remote working lifestyle to enjoy and to have fun as well, while we do the best work of our lives. So keep doing that and if you want to do that more and better, head to ThinkRemote.com, where we showcase the latest remote work news of interest. Such as this one and also give you the tips, guides, and tools that you need to be better at working remotely. This was Virtual Coffee Chat with Luis. If you enjoyed it, please press like, subscribe and share. See you tomorrow. 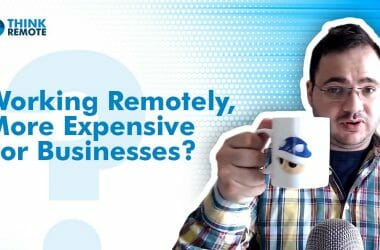 (VIDEO) REMOTE WORK: Positive or Negative for Companies? The NCPC shares its thoughts!

The NCPC said enterprises could secure productivity and competitiveness from remote working arrangements in the new bulletin. But… 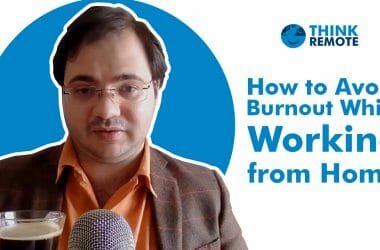 (VIDEO) Avoid Burnout While Working from Home – Luis Tells How

Have you experienced burnout while working from home? Luis has some really good tips here to get your… 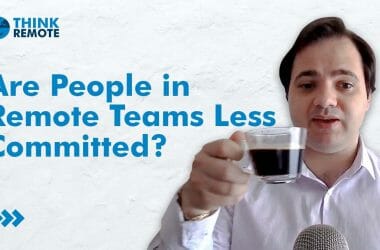 Are people in remote teams less committed? Luis shares a strategy that can help teams stick together through…

Lara Kremer
Read More
By browsing this website, you accept that cookies are happening, you can see how we use them here. They are sugar-free and protein-rich, so don’t worry too much.
Cookie settingsACCEPT
Manage consent