(VIDEO) The LAW That Prevents Workers from APPLYING TO REMOTE JOBS

Did you know the state of Colorado has a law that prevents all workers from applying to remote jobs? Let’s find out more about it with Luis!

Like Hilton, Nike, or Twitter, several enterprises have decided to stop hiring people from Colorado. So now, each available remote position they have prevents all Colorado citizens from applying. Quite UNFAIR, right?

But WHY does this happen? Is it a salary range problem, maybe? Watch the video to find out!

Did you know that there’s a law in Colorado that prevents workers from the state from applying to remote jobs? Well, let’s talk about it in Virtual Coffee Chat with Luis. Yes, this was a very small sip. It’s very, very warm, very, very hot, but also quite tasty. Anyway, anyway.

So let’s talk about a law, and to get this right, I have my trusty iPad with me, the battle-scarred iPad from nine years living together with cats. Let’s talk about a law that’s keeping companies from hiring remotely in Colorado, people from Colorado. So there are basically many, many enterprises, such as GoDaddy, Hilton, Nike, Twitter, Lincoln Financial, et cetera, that have stopped including people from Colorado in their remote work job openings. There’s actually a clause there saying this position is open to anyone except people living in Colorado.

Why is this? Well, it’s because they don’t want to say upfront what the salary range is. This is actually a quite well-intentioned law that was passed in Colorado. A law that requires employers to include pay ranges in job postings. So this is basically created in order for there to be more even pay. The law requires this so that the employers can’t then get away with offering lower salaries based on gender, et cetera. And obviously, that’s bad and we don’t want people to do that. At the same time, a lot of companies feel that they’re letting go of a competitive advantage if they cannot omit the salary range from their job descriptions.

So that leaves them with the option of if we have a job that’s open to anywhere, let’s say, in the United States, and in most states we don’t need to include the salary range, then let’s just not allow people from those states to apply and let’s keep our position offerings as they always have been, with salary on a negotiation basis. Now, I’m not in the position to comment if this is right or wrong on part of the companies, because I have connections with the recruitment industry so I would be biased. So I don’t want to talk about that. But I do think that it’s fair to say that a lot of people see that as a competitive advantage. Even some potential employees, because they feel that if they go into an open-ended discussion, they can negotiate a better deal for themselves.

Now, other people who maybe are uncomfortable or don’t particularly like to negotiate, I definitely don’t. I personally, I prefer the companies that tell me upfront, “Here is the position. Here’s how much we’re offering. Apply if you like that. Personally, I’m in that camp. I personally prefer that to be the case to positions that I apply. But I recognize that there are advantages for companies to do otherwise.

And this is kind of the problem with legislation, is that when you legislate something like this on a state level, then some companies are going to opt out. This would be fine if, for some reason, all of the talented people were in Colorado, or if the businesses were mandated to hire in Colorado. But the fact is, talent is evenly distributed across all the globe. So there aren’t more good people outside of Colorado or inside Colorado. The distribution is mostly the same. So companies being able to hire from anywhere, they decide to exclude the people living in Colorado, because they don’t want to match the requirements of the law.

This creates an awkward position. At the end of the day, on one hand, people in Colorado can probably say that they will have access to fairer salaried opportunities. On the other hand, they just made their state less competitive in terms for remote work. I think that this is just the fact that the people who make the laws are usually slightly out of touch with the most recent, the cutting edge, let’s say, of the market. Laws are usually passed taking into account several years, if not even decades, of what happened in the past. And the authors, usually the people who pass the laws aren’t really thinking about the things that happened in the last one or two years. So that’s most certainly the case here.

I don’t think that this was a meaningful attempt to discourage the people in Colorado from working remotely. I think that it was a law made with a lot of good intentions, taking into account what had happened in the state in the intervening years. But they simple did not take into account the shifts in the workplace that happened over the last two years. And now the people of Colorado are at a disadvantage. Because unless a law is passed on a federal level and even on a worldwide level, I guess, that if you have a remote work, you need to open it, it needs to obligatorily be open to people from anywhere, you can’t restrict where you hire based on state or based on country, even, that’s probably never going to happen, companies will be looking to more competitive states and even more competitive countries.

That’s part of the great thing about remote work is that it levels the playing field across the globe. And in a sense, I think that remote work is a positive and maybe they should reconsider the law. I don’t know. I don’t do politics. I’m just thinking that what is best for some edge cases to have access to fairer salaries. And I would say that, look, I would say this. If you’re working for a good company when you’re looking for a job, when you’re looking for a job and you’re doing the interview process, you can usually know. You usually figure out pretty fast if the company is trying to take advantage or not.

When you are looking to get hired, obviously if you’re not desperate… If you have bills that you have a burning need to pay, then don’t be too picky. There’s no shame in that. I have been in that place as well. But if you’re able to shop around, then you look for the culture. A company with a good culture, with a beautiful culture, and there are more and more companies out there that really care for their employees, will not try to pay you less than you’re worth based on negotiations, will not try to negotiate you down below what you are worth.

So that’s my advice, in essence. It sucks. I don’t have a really good advice to offer to the people living in Colorado. It would be very flippant of me to say to you, “Well, move to another state.” I know that’s not easy. I mean, I live in Portugal, in a tiny country, that we have districts. Portugal is divided by districts. And I don’t even want to move out of my district. I have my roots here. So I definitely understand that people wouldn’t want to move out of Colorado just to have access to a wider job pool. I can definitely understand that. So I don’t know. I guess that all I can do is wish good luck and hope that many companies, such as many forward-looking companies, are actually deciding to, “You know what? This is the right thing to do. We lose a bit of competitive advantage, but by putting the salary range in the job descriptions in the offers, we are going to be compliant with all the states. And we will be able to get people from all the states.” That’s my take on it.

This went a bit longer than usual. Sorry about that. It’s a complex issue and there are no good answers, sadly. I hope it gets straightened out. And I hope that the people of Colorado soon will have access to all the great remote offers out there. See you, everybody. If you enjoyed Virtual Coffee Chat with Luis, please head to thinkremote.com and subscribe. Bye-bye. 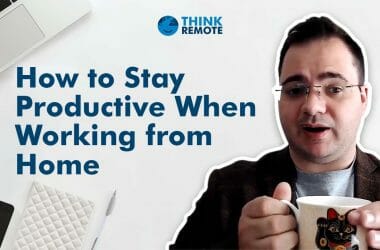 How to Stay PRODUCTIVE When Working from HOME

That’s a question we ask ourselves every day! If you are feeling overwhelmed or unproductive at work, you… 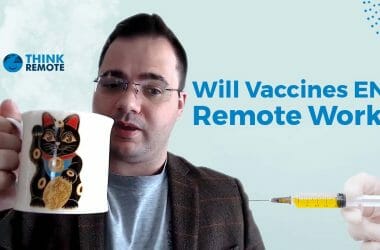 What will happen to remote work when the pandemic ends? Luis shares his thoughts. The state of Michigan… 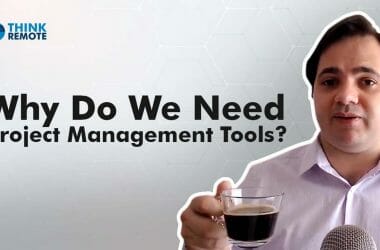 (VIDEO) Why Do We Need Project Management Tools? Luis Has The Answer

Do you need project management tools? It is important for remote teams to use them for increased efficiency.…