GitLab’s Remote Work Report 2021 provided a window to many countries that are good for remote hiring and working remotely. Luis shares all the details here.

Apparently companies in the US and the UK are 100% more likely to go fully remote compared to those in South America in general, South Korea, or even Australia. And Australia kind of surprises Luis! What does all of this mean for companies hiring and for people looking for jobs? If you’re someone who wants to move to another place, which one is best suited for you? Luis shares some interesting details in this video.

Watch this space every day for the best tips, news and stories from the remote work world!

If you’re looking for a job, or if you’re a hiring decision-maker in a company, the GitLab’s Remote Work Report has good news for you. Let’s find just how good in this episode of Virtual Coffee Chat with Luis.

Salut. I know I haven’t had a proper mug of coffee this week yet. I’ve been going with double espressos, I’m going to correct that soon. But for now, let’s talk a bit more, as I teased on yesterday’s chat, about the big report that GitLab released about the State of Remote Work. Now I want to focus on the first part of the report on how companies are transitioning and what that means for hiring.

So apparently companies in the US and the UK are 100% more likely to go full remote than companies in, let’s say, Brazil, South America in general, South Korea, or even Australia. And Australia kind of surprises me, but I thought that Australia would be very taking up the remote flag much more than it has. But anyway, what does this mean for companies hiring and for people looking for jobs?

Well, let’s start with people looking for jobs. This means, especially if you’re an Australian, there’s a huge opportunity. Last time I checked, the Australian Dollar was lower than either the US Dollar and much lower than the British Pound. And you already speak the language, so you might need to be a bit creative in your scheduling because even though a lot of companies have adopted remote work, not all of them have adopted a sync work, so you still might need to work on their schedule.

But if you’re okay with taking care of the time zone differences, this seems a pretty good opportunity to get employed by an American or a British company. You’ll obviously likely want to get the same salary, the equivalent salary that you were going to be paid in Australia, but you can make a nice profit just because the North American, the US Dollar, and the British Pound are a bit higher. And of course you get to work remotely, which apparently you don’t get to do so in Australia that much. So that would be nice.

On the other hand, if you’re in one of the other countries where companies aren’t jumping so much on the remote bandwagon, this is a really good opportunity. I actually don’t know what’s the economical situation in South Korea, but I’m betting that as in most of the world, it was probably hit somewhat by the pandemic so people would be looking for jobs. And again, apart from the time zone problem, there’s nothing holding you back from looking for a job in the US or in the UK. Same things with people from the Brazil.

Now this brings up the number one skill that you should develop, if you haven’t already. And I’ve been asked this a lot times in my career. I have had an interesting career, I’ve jumped around. I’ve worked seven years as a dentist. I’ve worked nearly as much as the writer, and now I’m a marketer. And people asked me what allowed me to do this? If I had to choose one thing, what allowed me to be reasonably successful over such different areas?

And especially to jump, to shift careers so well. And the superpower is English. Now, you’ve been listening to me for a couple of minutes now, you know my English isn’t perfect, far from it. But it’s good enough to understand and be understood clearly. And that ultimately is what has enabled me to do this, to shift careers and to tap into job markets that are far superior to the one where I am the native from, from Portugal.

So if you’re hearing this, and you’re not the native English speaker, know that that is the superpower that you need to develop. I don’t care what your job is. Let’s say that you’re a developer. That the way you earn your bread is by coding. Well, you need to add an extra language on top of that, which is English, you need to be … Because communication matters a lot in remote work. If you get a remote job and you’re not good at communication, you’re not going to last long.

And, well, the countries that are going to hardest on remote work are English speaking countries. So that is the super power my Brazilian and the South Korean friends. South Africa, I also believe is among the among those. And South Africa, most people there speak very good English. So that’s also, I guess I would put that in together with Australia.

So that’s the key thing. Obviously be good at your job, but brush up on the English. Take some extra lessons, et cetera. It’s going to do you a world of good. I cannot stress you enough, knowing good English in 2021, that’s like a superpower. So that’s what I really recommend, that will allow you to tap into opportunities, into markets that are much richer than your own.

On the other hand, if you are hiring and you’re in the US or in the UK, well, guess what? People in Brazil, South Korea, South Africa, and even Australia, they’re not getting their remote work needs met. A lot of companies there are still not onboard with remote, so there’s a possibility.

Now let’s assume that talent knows no borders, I think that’s a safe assumption. We know that many of these countries have spent massive resources in improving the level of education, especially technical education. So there are really good experts that are for one reason or another stuck in those countries. And if they just had the chance to work remotely, they would gladly work for a company in another country, being paid what they are worth instead of being paid whatever their native country ascribes to their profession, which often it’s not on the level of the education that they got.

I see this in my country, Portugal, a lot. Actually people do have very expensive degrees, good quality degrees from good quality colleges and universities. And then they go to the job market and they are disillusioned, because the Portuguese job market just doesn’t pay what they are worth based on their education and their skills. So they’re obviously looking for something that pays better, that pays what they feel they are worth.

And in these countries that don’t allow for remote work, they are clearly not getting the remote, the flexibility and everything that remote work promises them. So they’re ripe for the picking. Good talent, great talent ripe for the picking from companies from the US and the UK. So that’s something to think about the next time you consider finding someone to fill the vacant spots on your team or to build your team, it really makes sense to focus on these countries. Countries where remote work is not so developed, is not so accepted, because chances are there are some very talented people that want in on the UK and US job market. And now is the prime time to do it.

Anyway, that’s my takeaway from the first part of GitLab’s Remote Work Report. I’m going to keep on reading it, I’m going to keep on doing some takeaways. If you enjoy it, let me know. Tell me in the comments what would you like me to talk about. And if you haven’t visited Think Remote yet, please do. That’s thinkremote.com, where you can find the latest news about remote work and also a lot of quality guides and how [inaudible 00:09:16]. This was Virtual Coffee Chat with Louis for Think Remote. See you tomorrow. 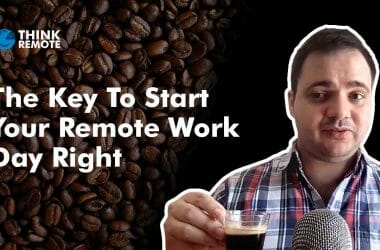 The KEY To Start Your REMOTE WORK Day Right!

By now, you are probably feeling off work sometimes, right? Working from home can be hard, especially if… 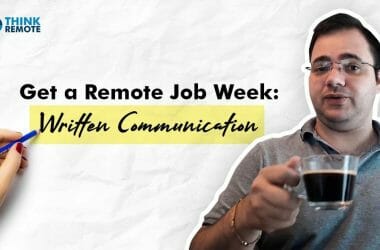 For this week, Luis prepared something different: the Get A Remote JOB Week! He’ll talk about everything you… 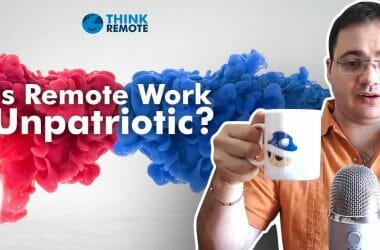 Unpatriotic? Why would it be unpatriotic? You may not believe so, but many people wonder about this. Find…